TO BE CONSECRATED TOMORROW

NORWOOD. .May 29—Tomorrow morning there will be formally consecrated in Highland Cemetery the mortuary chapel of St Gabriel the Archangel, erected to their parents by Mr and Mrs Lewis Day.
This is the first chapel Norwood has ever had in its cemeteries. Though erected as a private memorial it will be for the free use of all, regardless of creed, sect or race, who bring their dead to this cemetery for interment.

The chapel is of seam-faced Weymouth granite and Indiana limestone. It is adorned with beautiful carving without and within. Connected with the chapel is a chantey separated from it by a grill. It will be presided with chairs and will seat about 50 persons.

The services tomorrow will include consecration address by Rev William B. Eddy of Cambridge formerly pastor of the Norwood Universalist church, and devotional exercises, in which Revs Arthur Howe Pingree, J. F. Knotts and George W. Nead of Norwood will participate. In the musical service Arthur S. Hyde, organist and choirmaster of Emmanuel church, Boston, with a few of his choir boys, will assist.

On the exterior of the chapel will be placed a memorial tablet, stating that “This chapel is erected by Mr and Mrs Day to their parents, Joseph and Hannah Rhoades Day, and Lyman and Melinda Guild Smith.” The late Hon Joseph Day was formerly state senator from this district and was prominent as a local manufacturer and in the social and political life of the town and county. Lyman Smith was also a notable citizen of the town and one of the leading founders of its important tanning industry.

After the dedication the chapel will be open to the public between 10:30 a m and 6 p. m. Members of the G. A. R. post, relatives, intimate friends and invited guests will attend the service of consecration. 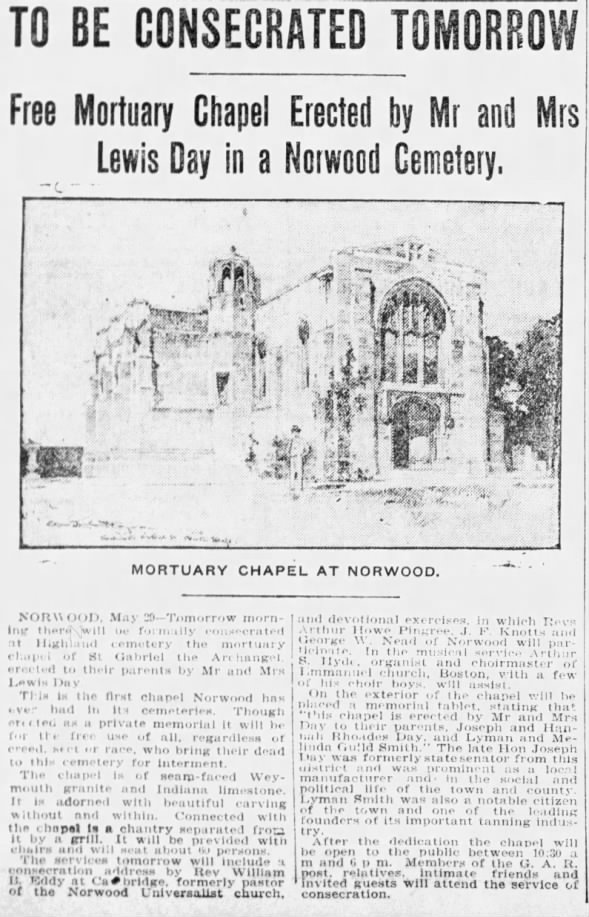 1 thought on “This Day In Norwood History-May 29”