PAY FOR GUARDS, BUT NOT FOR BRIDGE

Norwood and Street Railway Still Deadlocked Over Apportionment of Costs

CANTON, May 22—A delegation from the Merchants’ Club of Norwood will consult the Selectmen Monday evening In regard to allowing electric cars from this town to cross the new Neponset River Bridge. At the last meeting of the Merchants’ Club John F. Callahan, Eugene Sullivan and H. E. Rice were appointed to investigate the matter and if possible bring about harmony between the street railroads, the County Commissioners and the Norwood Selectmen.

The town of Norwood has built a small shanty on the tracks in the middle of the bridge to prevent the operation of cars.

The trouble is over who shall pay for the new bridge which cost $9000. The county will bear half the expense and Canton and . Norwood are to pay the balance less what the State will contribute. The Norwood Selectmen estimate that their share at $2000.

The Norwood, Canton and Sharon Company threaten to stop running its cars. The road is paying a man $14 a week to watch the car which remains at the bridge.

The town of Norwood employs a police officer to watch the bridge to see that the obstructions are not removed. 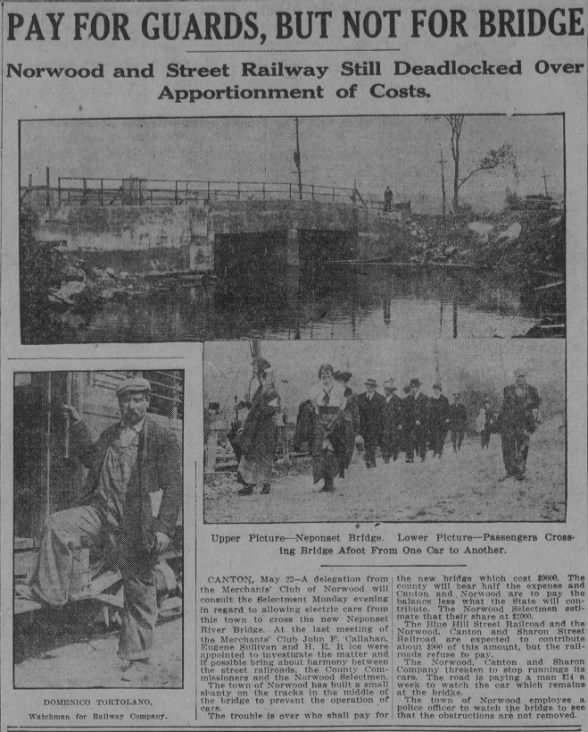