A fire which police said was set by five young boys, destroyed five cows, a large barn and adjoining milkshed of the Neponset Valley Farm at 4:30 p . m. today, with damage estimated at $20,000.

Police Chief Thomas C. Lydon said that the boys, seen leaving the vicinity of the farm shortly before the fire was discovered, admitted that one of the group threw lighted matches through an open window, setting the hay in the barn ablaze.

The boys, aged from 6 to 9, were rounded up by police Lt Patrick Coyne and Sgt Mark Folan. They were later released in custody of their parents while Chief Lydon prepared to confer with the state fire marshal’s office on the disposition of their cases.

Traffic on Route 1 to Providence was delayed 25 minutes by the blaze as hundreds of motorists stopped to watch. State Police from the Wrentham Barracks cleared the jam. The barn is located on Neponset st., only 100 yards from the intersection with Route 1.

Five of the 30 cattle housed in the milkshed perished. Farmhands led the rest to safety before the blaze forced them from the building.

The fire department arrived too late to check the blaze in the 2 story wooden structure. Flames spread to a smaller barn several hundred feet away, but were quickly extinguished.

Flying embers crossed Route 1 and started a wood and grass fire adjacent to the airport. The Westwood Fire Department was called and soon had the fire under control.

The barn and milkshed were owned by Leonard C. Fisher, operator of the Neponset Valley Farm. 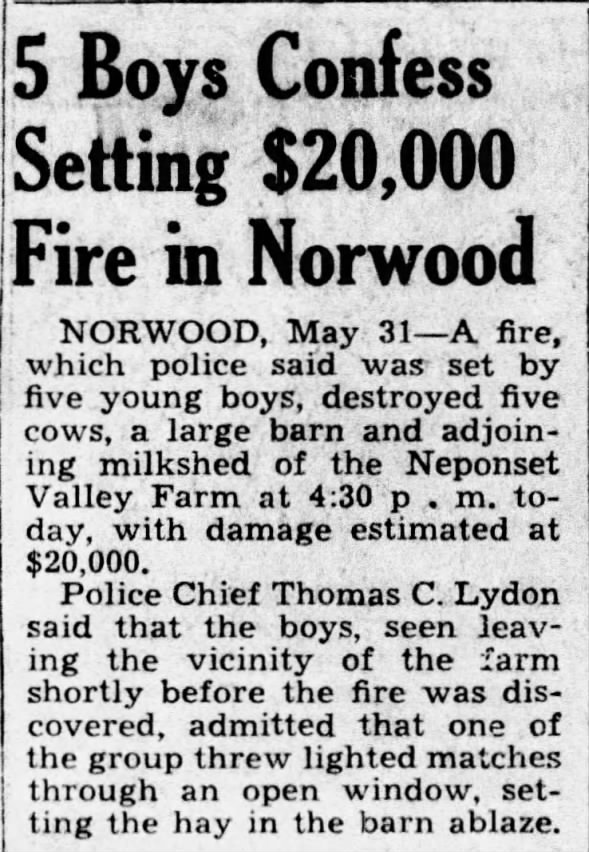