NORWOOD IS TO HAVE A FINE BALL GROUND.

NORWOOD, May 27, 1911—The Norwood Civic association is to have one of the best baseball diamonds in Norfolk county. Extensive plans arc being made for the grading of the land around the clubhouse, which includes six acres in the centre of the town. Nearly half will be devoted to baseball, and it is expected to have the diamond completed by August, with all the accessories.

A running track and tennis courts will also be laid out. and probably a swimming pool. Operations are already underway.

Meantime the Civic association has organized a baseball team composed strictly of amateurs, averaging about 21 years old. There are more than 20 candidates in the squad, including several ex-collage players.

John F. Kiley, formerly pitcher on the Boston National league team, now town clerk of Norwood, has consented to coach the team. George H. O’Brien has been chosen manager, and desires games with good teams. The games must be played out of town until Aug 15, when the home grounds will be ready. Manager O’Brien can be addressed at the Norwood Civic association. Norwood. Mass. 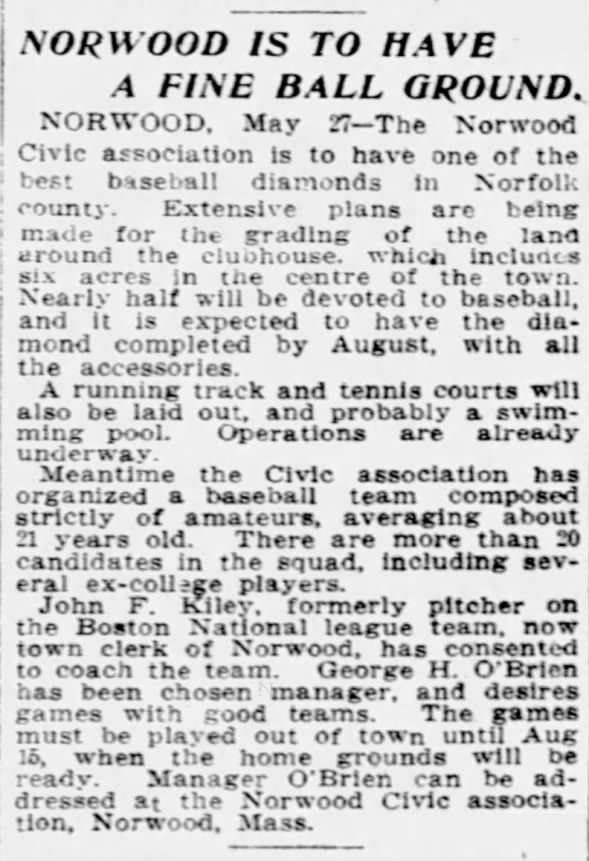