NORWOOD’S MEMORIAL MUNICIPAL BUILDING AS IT WILL LOOK WHEN COMPLETED

NORWOOD, May 26—The dream of a good many years was realized Monday evening in Everett Hall at the special town meeting when the citizens unanimously voted to appropriate $265,000 for a Memorial Municipal Building.

For many years this question has hung fire and from the files of a town paper of more than 25 years ago, reports show that the town was ready then to erect a town hall, mid even went so far as to elect the committee to serve on this project, ever, always nosed out in favor of other matters, such as schools, the sewerage system, etc.

The special town meeting Monday was presided over by Judge James A. Halloran. Francis J. Foley, chairman of the Municipal Memorial Building, read the report of the committee and explained clearly and concisely just why the type of building was chosen, how the figures had been arrived at and why Norwood could afford this building much better than surrounding towns could.

This was followed by a stereopticon slide lecture by Mr. Foley in which all the views of the new building, shown from every angle, were exhibited. Pictures of buildings of this particular type of architecture, at Princeton and Yale, were also thrown upon the screen as well as views of Norwood several years ago, showing narrow, unpaved streets lined with shade trees and small wooden buildings.

After the stereopticon lecture, Mr. Foley concluded by saying that for many years the Selectmen and town officials had looked for a suitable memorial for the veterans of all wars who had gone forth from Norwood or South Dedham, as It once was. It was finally decided to build a Municipal Building which would be a memorial to all Norwood’s soldiers and which would contain their names In a bronze tablet placed in the tower of such a building.

Mrs. Nellie Morrow, a member of the Building Committee, has worked long and assiduously and has compiled a list of two veterans of the war of 1740, In the expedition against the Spanish and West Indian Islands, 32 of the French and Indian Wars, 68 of the Revolutionary War, 86 of the Civil War and 527 of the World War.

Mr. Foley pointed out that the town should be run on the same basis as a business: ” You have to spend money to make money.” He said that the Memorial Building would be a great incentive to people to make their residences in Norwood which, he pointed out, would certainly help the tax rate problem.

The Municipal Electric Light Department was indicated as being a wonderful example of “spending money to make money.’* In 1908 it was necessary to borrow $56,000 by bonds for the Norwood Electric Light Department and to raise by taxation $17,000. Each year it increased until it has a value today of $325,000. The town pays for its lighting of the streets, $6500. If this current was bought from an outside company It would cost at least $20,000, Mr. Foley assorted. The town taxes the Electric Light Department for $8500, “so the town has certainly made money on this and saved the householder about 17 1/2 percent on electric light bills.”

Mr. Foley concluded by saying that he thought this building would be a splendid memorial to the soldiers of Norwood end would be an individual and Ideal Municipal Building, and he sincerely hoped the citizens would regard it as such.

In accordance with Article 1 of the town warrant, this report was accepted and Article 2, to see what sum the town would vote to raise by taxation and borrow and appropriate for the erection of a Municipal Building, or to take any other action In the matter, was then read.

The article was open for discussion and one citizen asked how it would affect the tax rate. Mr. Foley said that It would mean a tax rate of $1 more per thousand for the coming year, but after that, it would be much less.

The Finance Commission recommended that the sum of $265,000 be appropriated to cover the cost of erecting this building. The sum of $10,000 had already been appropriated at a previous town meeting to take care of any expense incurred in making plans for the building.

It took 17 minutes from the time that the article was read until It was unanimously carried by a vote of 281 citizens.

Rev George W. Nead, commander of George K. Bird Post of the G. A. R., took the floor and said that he was glad to be alive to see this project, which had the whole-hearted approval of the members of the G. A. R., go through. Mr. Nead said that for many years they had waited for this, and he could think of no more fitting memorial to all the soldiers of Norwood than this splendid building.

A vote was passed thanking the committee, who consisted of Francis J. Foley, chairman; Mrs. Nellie B. Morrow, James A. Hartshorn, Francis E. Bernier, and Gladwin M. Mead, for their time and money spent in working on the plans for the building.

The meeting was then adjourned.

This beautiful building will be placed in the new town square, where the proposed armory will be built, the new $250,000 theatre, and the new park. All the electric light wires are now being put underground and it is expected that Norwood will have one of the most beautiful town squares in New England when finished. 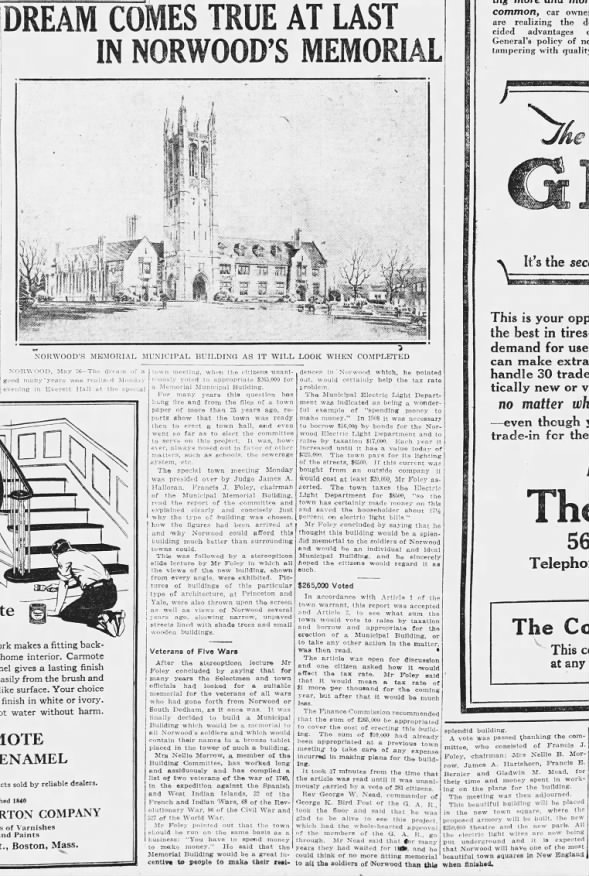