The sound of cheering fans at Norwood Arena has given away to a new type of roar from townspeople and municipal officials.

A proposal to erect 496 apartment units along with a sprawling shopping center at the Route 1 site has triggered controversy in this town of 33,000.

While workmen are knocking down the remains of the sports plant that was damaged by a fire last winter, a new attempt is being made to develop housing on the 100-acre area.

On three previous occasions according to acting Planning Board chairman Thomas Riolo, town meeting representatives rejected housing at the site.

Riolo yesterday confirmed a report that Alan G. Zuker of Brookline and Atty. John Mulvihill will present a petition signed by 10 local voters to have a new public hearing. He said the session would probably be held July 1, and would set the stage for a special town meeting to vote on the latest housing plan at Norwood Arena.

The backers of the development have been accorded the right to build a shopping complex at the location but they are eager to incorporate this proposal with a housing complex plan.

Riolo says that the recent town meeting rejected the housing plan. “The proposal even failed to get a simple majority. You know it needs 2/3 to change the zoning from the present limited manufacturing,” Riolo noted.

Riolo said his board voted 4-1 for the Zuker proposal with the lone dissenter Thomas F. Cavanaugh, a Boston school teacher. Cavanaugh, according to Riolo, felt that Norwood was oversaturated with apartments and the housing development would generate more public school children.

Plans show that 470 of the apartments would be one-room units and the remainder 2 bedrooms with the complex catering to low and moderate income families and retired people, Riolo said.

The multi-million dollar project would return some $300,000 annually in taxes after it is completed within a four-year period, but it is not known what Norwood would get in return on the shopping complex. “The housing plan would reflect between $2.50 and $3.00 on the tax rate, “Riolo said.

Norwood’s current tax rate is $38 and based on a firm 100 percent valuation. Norwood has shown a steady population growth and there are some 2000 apartment units dotting the 10-square-mile community. 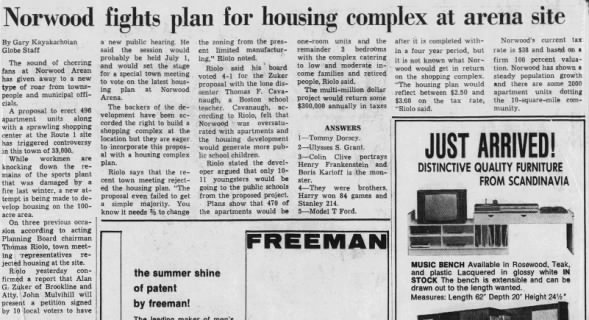