June 3, 1954- BEHIND THE LOCKED DOOR leading to the tower of the Town Hall at Norwood, this continent’s only blind carilloner—possibly the only one in the world—concertizes 19 times a year. There is a reason why the door is locked. Roger T. Walker of Hyde Park plays the 50 bells wearing only shorts, socks and shoes. Playing the carillon is exhausting. Walker loses perhaps two pounds during a concert.

“IF I’M expecting visitors,” Walker explained, ‘‘I dress. Of course, visitors are apt to focus their attention on WHAT I’m doing, rather than the effect I’m getting. The best point at which to listen to a carillon is approximately 200 yards from the place where it is being played. It is rather hard work and, since it is played with both hands and feet, one needs freedom of movement.”

THE OUTER SIDE of Walker’s little fingers is thickly calloused, despite the fact he tapes his hands. The carillon is played with the side of a half-clenched fist. The mechanism is similar to that of an organ, except that light wooden levers, somewhat wider than piano keys, take the place of the ivories. The levers are attached to the clappers by means of wires and cranks.

THE CLAPPER strikes the bell on the inside surface at a point near its largest diameter, and need travel only an inch to bring out the full volume of the sound. Pedals are attached to the levers connected with the heavier bells, so they can be played with the foot. The heaviest bell in the Norwood carillon weighs 7840 pounds, and its clapper weighs 162 pounds.

“AT RIVERSIDE DRIVE Church In New York, where I have played.” said Walker, “the carillon has 72 bells. Its heaviest bell weighs 40,926 pounds, and it is struck with a clapper weighing two tons. There the performance of the pedals is facilitated by an electro-pneumatic motor. The carillon at Norwood is entirely manual. Smallest carillons have a range of two octaves, and the larger about 4 octaves.

WALKER TUNES pianos. Some of the great pianists request that he be in the wings during their concert. Said the great Vladmir Horowitz: “Mr. Walker, I want my piano at exactly 440 (standard pitch). Hit it hard when tuning. I hit it hard, and I don’t want to destroy your tuning job.”

WALKER, affectionately called “Zeke,” studied piano and organ at Perkins Institute here, where he also took up piano tuning. Later, the 54-year-old carilloner studied piano and organ at New England Conservatory of Music. Still later, he studied three Winters in New York with the celebrated Kamiel Le Fev’ere, who now plays the Riverside Church carillon, and who dedicated the Norwood carillon in 1928. 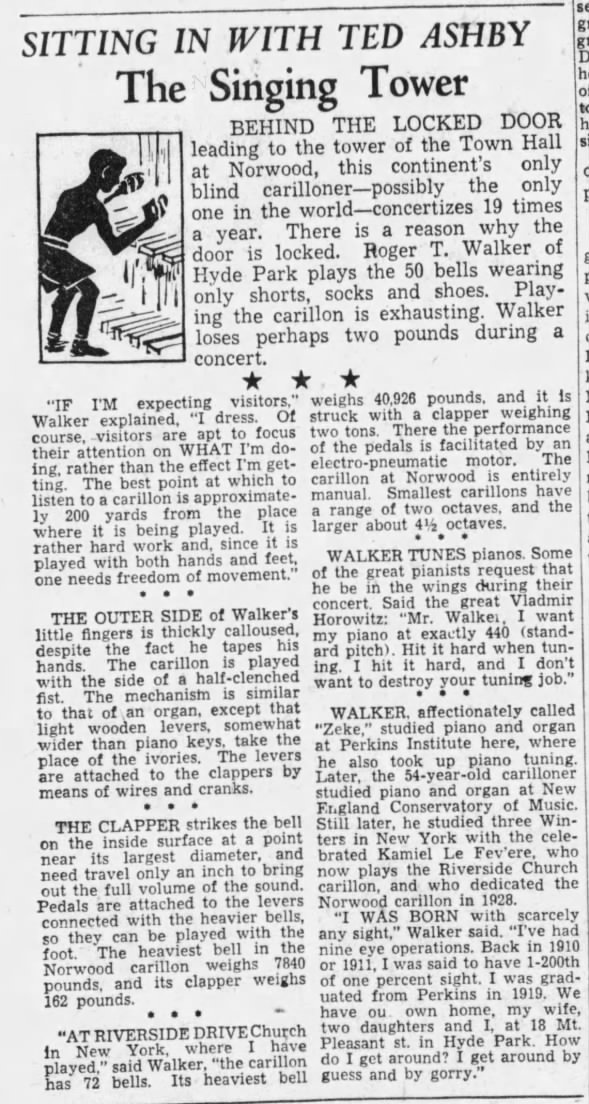