“Nothing succeeds like success,” says the old French proverb and in a nutshell that explains the amazing success of The Harp & Bard Restaurant & Pub in blending the best features of Ireland’s and Britain’s finest public houses.

Offering delectable food, a friendly atmosphere and outstanding entertainment, the original Harp & Bard opened less than three years ago at Rtes. 1 and 62 Danvers, to become an instant success.

Days ago, its energetic management opened a twin undertaking on a larger scale on Rte. 1, Norwood, emphasizing the same attractions for connoisseurs of robust food servings and zesty drink laced with song and laughter.

The opening gives dine-out devotees South of Boston on Rte. 1 the same opportunity for enjoyment previously available to their counterparts on Rte. 1 North of Boston.

The new Norwood fun spot is approximately one-quarter larger than its predessor, expensively constructed along similar Tudor lines. Both interiors are highlighted by fascinating collections of antiques carefully selected for their authenticity in Ireland, England and Scotland.

Browsing among the hundreds of ancient curios ranging from oil paintings dating back to the 1800s, Scottish bagpipes, centuries old kettles and pub lanterns, horse brass and a reproduction of a 13th century Viking sword is just another reason to visit either Harp & Bard.

Recently added to the menu nightly (except Saturday) was The Harp & Bard’s famous corned beef and cabbage dinner in portions fit to appease a longshoreman’s appetite that had previously been a twice weekly special.

The Danvers restaurant served 1300 lbs. of the perfectly corned beef last St. Patrick’s day and it is estimated that next year the twin restaurant will serve 3000 lbs.

The Norwood Harp & Bard differs from its Newburyport Turnpike mate by including an oyster bar and a complete luncheon menu in its Pub and also has special function rooms seating 250 persons.

Its Ballard Room matches a similar facility added last year to the Danvers restaurant that added 200 seats to its Pub portion.

International balladiers and instrumentalists perform nightly, plus Sunday matinees, in both Harp & Bards through a unique arrangement worked out by the management.

Eight interchangeable combinations of acts by world-renowned entertainers rotate regularly throughout the week between the two Ballard rooms and the two main dining rooms.

They include: the McTaggerts, a prominent Irish folk singing group: Jessie Owens, Dublin’s outstanding recording and television star and his All-Ireland concertina accompanist, Jimmy Keane: and Paddy Reiley, Dublin ballad singer whose numerous appearances in Liberty Hall there compares to performing in our Carnegie Hall.

Also: Charlie McGee, considered the ‘father’ of Irish ballad music, whose many compositions include the popular “Homes of Donegal.” Paddy Noonan, famous accordionist whose recording have outsold any other Irish artist in this country: Chris Henshaw, noted Dublin folk singer and the Blarney Folk, the most successful Irish ballad group performing today in the United States with two albums, television appearances and tours of this country and Canada to their credit.

Most of the entertainers will be making their second and third appearances at The Harp & Bard, attesting to their ability and popularity. 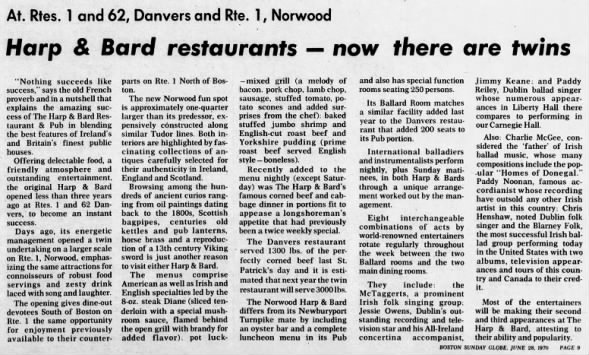