NORWOOD, June 14-The largest turnout of the season Is expected at the special town meeting to be held tomorrow evening starting at 8 o’clock in Everett Hall to hear and act on the report of the Memorial Municipal Building committee and to appropriate sufficient additional amount of money so that the committee can go ahead with the plans for immediate erection of the building

The committee is requesting the town to appropriate $62,000 more to be used for furnishings for the building, grading the grounds, etc, and a part of this sum Will take care of the cost of the building which was slightly higher than that estimated when the first appropriation of $275,000 was made.

Francis J. Foley, chairman of the building committee, has been talking before the Rotary Club, Chamber of Commerce and various fraternal and social organizations throughout the past Winter explaining the phases of the Memorial building and pointing out the reasons why Norwood should have and can afford such a structure.

Mr Foley states that they have many veterans In wars from 1740 up to the World War and that Norwood has never erected any sort of a memorial to them. As far back as 25 years ago. the town appointed a committee to superintend the erection of a municipal building. This committee stated that It believed that this building should have some memorial aspect as w’ell as municipal. The question has been hanging fire until the present committee was appointed a few years ago. Since then Its members have been working diligently and have studied many buildings and types of architecture, visiting colleges in the East and municipal buildings in New England.

With the aid of several architectural experts they decided upon the present building. It will be devoted to municipal offices, police station and the large tower will contain a tablet with the names of all who ever went from Norwood to the Nation’s wars inscribed on it.

Will Be Great Asset

According to statistics compiled by Mr Foley and his committee, there were two soldiers in the expedition against the Spanish West Indian Islands in 1740, 32 in the French and Indian War of 1751, 68 in the Revolutionary War, 86 in the Civil War, 3 in the Spanish-American War and 527 in the World War.

“This building will be one of the most beautiful municipal or memorial buildings in the East when completed,” said Mr Foley, “It will be a great asset to the town of Norwood, for at least 6,000,000 to 8,000,000 autoists pass along the main street each year which will bring to the town an inestimable amount of advertising and prestige which should help in building Norwood and attract the attention of industry owners and potential home owners.

Two town meetings have already been held on the Memorial Municipal Building. At the first, over a year ago, the town voted to appropriate $10,000 so that the building committee could go ahead with plans on the building. Soon after, $265,000 was appropriated. When the committee asked for bids on its plans, it found that they were exceedingly high and came far over the appropriation. It asked for another set of bids with minor changes and received figures which were within the appropriation.

Much interest has been evidenced by the citizens of the town and it is expected that Everett Hall will be packed with citizens tomorrow evening. 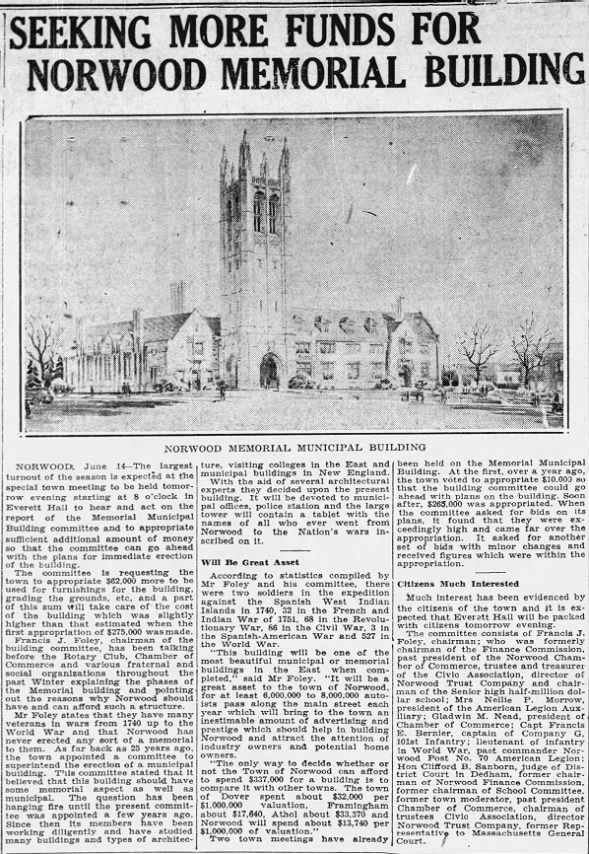