June 10, 1945 – Governor Darden has just received his commission as an honorary lieutenant in the Eighty-Sixth Fighter-Bomber Group, better known in the European Theater of War as “Lee’s Lieutenants.”

The commission is a certificate signed by Lieutenant Colonel George T. Lee, of Norwood, Mass., commanding officer of the famous unit and holder of the ETO record of 258 combat missions. The appointment of the Governor was made by Colonel Lee on the recommendation of Lieutenant-Colonel James K. Thomas, of Charleston, W. Va.

Governor Darden, who served with the Air Corps in World War I, wrote Colonel Lee that he is “pleased to be included in such a distinguished outfit.”

“We, here,” the Governor wrote, “have followed with keen interest the magnificent contribution which has been made by the Air Force in the campaign in Europe. This has been especially true in my case because having belonged to the Air Corps in World War I, I realize what a superb contribution has been made by your group.”

The “Lee’s Lieutenants” group flew its last mission in Europe on the morning of V-E Day, rounding out more than two years of service in the Mediterranean and in Europe. It has flown alternately as a unit of the Twelfth Air Force and the First Tactical Air Force and at present is based at Gross Grau, Germany, as a part of the Ninth Air Force, awaiting redeployment.

Sixty-one men in the unit lost their lives in action and 61 others are missing. During combat the enemy destroyed 200 and damaged an additional 800 of the group’s planes. Virtually all of the losses were attributed to flak.

The original complement of officers with the group are now authorized to wear seven battle stars. 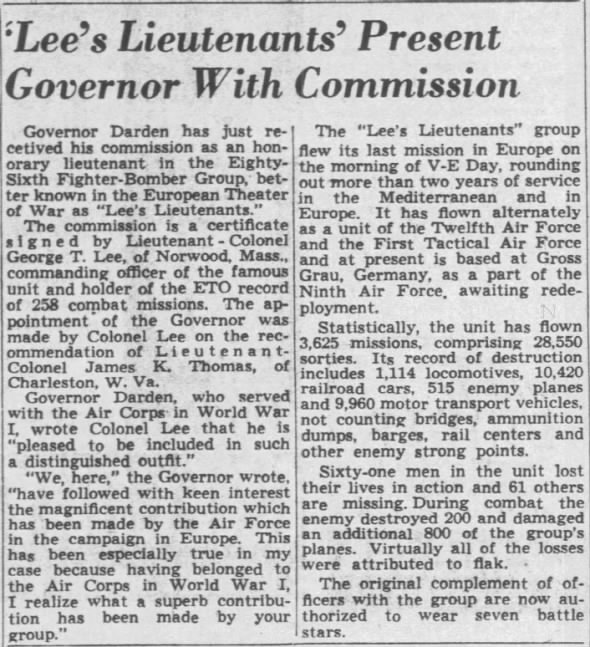