DEDHAM. June 11 – Curtis O. Nordstrom, 10, of 30 Oolah av, Norwood, and Joseph Antonelli, 9, of 21 Tremont st, were apprehended shortly after 1 o’clock this morning by the police in Attleboro after a wild ride in a stolen automobile.

The Norwood police received complaints early last evening that garages were being broken into. They discovered that three had been entered and automobile keys and a bicycle taken from one of them. A bicycle also had been stolen from the piazza of a home on Lincoln st. Norwood.

The two boys who are alleged to have taken the bicycles abandoned them on Lincoln st for a new roadster. They started to drive about Norwood and then turned onto the Providence turnpike toward Walpole and Wrentham. They were observed by police at North Attleboro, who had been notified by Chief William Sullivan of the Norwood police to be on the lookout for them, but. when commanded to stop, the boys stepped on the gasoline. The police gave chase in a taxicab, which was soon distanced, and eventually lost trace of the flying car.

The police, touring the neighborhood in case the boys had not left it, came upon them walking on the road. At first the boys denied they had taken the car, but later confessed that they had deserted it in a sandpit. Norwood was notified, and later this morning Chief Sullivan went to Attleboro to take the boys back with him.

The chief asked the Nordstrom boy, who is scarcely over 3 feet tall, how he managed to drive the car. He said that he did it by standing up at the wheel. Where he learned to drive or how he managed to keep the car on the road during his 22-mile jaunt is a mystery to the police.

The boys will be arraigned in the Juvenile Court on Thursday. 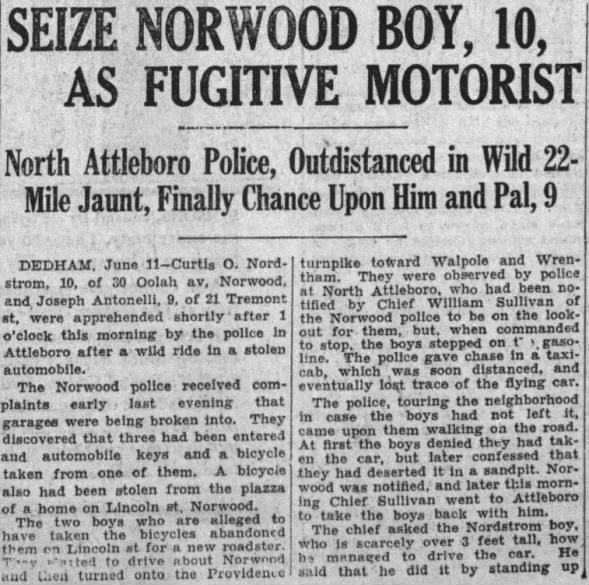